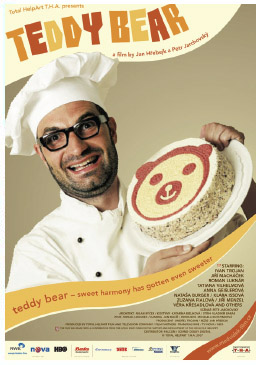 Jirka, Roman, and Ivan have been friends since school. Today they are about 35 and, although they went
into different fields, their friendship has lasted. They are married (Jirka’s wife is named Vanda, Roman’s is
Anna and Ivan’s is Johanka), each is working on his career, and they are doing well. Jirka is a gallery owner,
Roman a doctor, and Ivan a diplomat.
Each of the three friends hides a secret, and their lives change radically when the secrets come out. How will the three friends stand up to the tests they are forced to face? Will their friendship survive? Does such friendship exist among the women?
The three marital etudes are interconnected: while one is developing, another is just beginning and touches on questions brought up by the first two or alters them. Just as the bear cake which Anna bakes is made up of layers of cake and cream, so is Teddy Bear a layered story of three men, but also of five women: Anna, Vanda, Johanka, Jutka, and Ema. They are betrayed and betraying women who – after often absurd situations – have an adventure together in the end.