Out of the City / Cesta z města 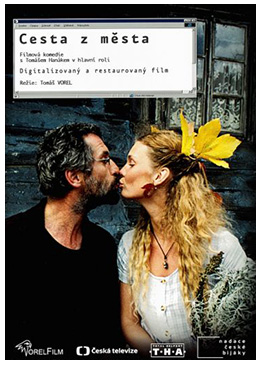 A divorced programmer named Honza, who is working on a central citizens’ registry database, spends most of his time at the computer. When he gets permission from his boss to have a weekend off in the country with his son, he automatically packs his indispensable cell phone, laptop and digital camera. During the weekend, however, nature gradually enchants this notorious workaholic, as does the ethereal Markéta, a girl he meets picking apples in a village. The trip turns into a sojourn of several days duration, and Honza, having spent the most beautiful moments of his life there, decides that he and his son will stay. He gets to know the character and harmony of village life, including Markéta’s down-to-earth grandmother and many other local figures. Before winter sets in, however, Honza receives a visit from his boss, his fellow-colleagues and the company psychologist. The law of business is flexing its muscles and our hero must get back to work, and to his hectic life in the big city. Vorel’s comedy about civilisation is one of the Czech Republic’s biggest box office successes.