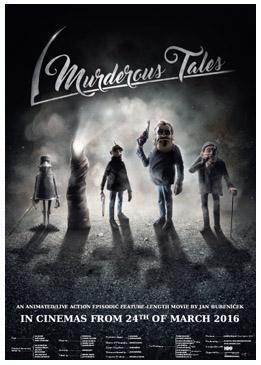 Each episode uses different production technology and is in a different genre, but both their form and their content are related. All the episodes are about double standards and the topics of heroism and death. Something very small meets something very big (a tiny knight meets a huge dragon, an old Mexican goblin meets a man, a tiny Professor meets real-life cows, two mobsters meet the Big Man). All these meetings result in the heroic death of the small principal characters. Each script sees heroism and death differently.

Synopses of the individual stories

A playful and slightly sentimental story in which Josef (Jan Budař) inherits an apartment from his slightly odd granddad and discovers Antonio, a goblin who lives in a large cactus. They play tricks with each other. Antonio tries to run away and is trapped in the fridge. By the time Josef finds out that Antonio was once brought by his granddad from Mexico, it's too late to save him. Technology: 3D animation/motion capture

Even though the story takes place on the edge of our world - in a swamp behind a cowshed - there are no humans in it. We see everything through the eyes of a 20 centimetres tall creature, the Professor.

The Professor comes in the early spring as a researcher from the University of Elsewhere. All the things we take for granted are for him an amazing virgin wilderness full of wonders. He researches it and sends excited reports about it back home. The pinnacle of his research is the discovery of cows, which, from his perspective, are gargantuan animals with miraculous abilities. The Professor devotes all his time to researching the cows. From time to time he sends smaller animals to his Superior back at the University of Elsewhere as respected guests. As time goes by, the Professor discovers that his Superior is misleading him and killing and turning animals into displays. He selects the cows as his next victim. He wants the Professor to send a cow's head back to the University.  The Professor disobeys, breaks contact with the University and decides to stay in the swamp even under a threat of the approaching winter, which will surely mean his death.
His Superior is not one to tolerate such mutiny. He arrives at the swamp one day. During a fight, both scientists die. The Professor is pecked to death by hungry chickens, while the Superior drowns in the swamp trying to run away. In the end, the Professor's beloved cows carry his body to their shed. Technology: 3D animation/motion capture

The Big Man is a puppet animation road movie about the unfortunate deaths of two failed hitmen. Bruno and Marvin are not aware that this mission is the last one their prized, meticulously kept, Tatra sedan will take them on.
The two hit men are heading west to find and kill a man. The description of their target is fairly general: "he's someone you can't miss, a heavyweight, big man – you'll recognise him when you see him". Bruno and Marvin realise they have no chance of finding the Big Man without help. They decide to give rides to hitchhikers and ask them whether they know the Big Man and where they could find him. The hitchhikers (a Vietnam veteran, a philosopher and a nun) all tell their stories and all talk about a "great man". For the veteran, it was a short skinny man, who saved his entire unit by sacrificing himself in battle. For the philosopher, it was René Descartes, and for the nun, Jesus. To the naive mobsters, all these characters morph into one. So they start to look for Jesus Descartes. When they finally, under the influence of drugs, almost crash into the real Big Man, who is about 10 times bigger than them, they are more likely to ask for his autograph than anything else. But the Big Man pulls out his gun. In an absurd disproportionate shoot out, the mobsters are both killed. Only a new dawn reveals how senseless and needless their deaths were. Technology: puppets combined with miniatures, back projection and actor scenes.

A cartoon slapstick comedy with two classic heroes – the Dragon and the Knight - where death is the punch line at the end of each of the three short stories and the knight's heroism is more or less a product of his suicidal stupidity. He is so convinced of his invincibility that he faces the dragon without fear. Technology: 3D animation.