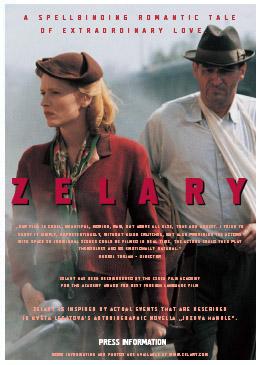 It is the 1940s and the Czech lands have been occupied by the Nazis. Eliška is a young woman who was unable to
complete medical school because the Germans closed the universities and now works as a nurse in a city hospital. She is also involved in the resistance movement along with her lover, the surgeon Richard, and their friend Dr. Chládek.

One night, a man from a rural mountain area is brought to the hospital with serious injuries and desperately needs
a transfusion. Eliška is the only one with the same blood type. Her blood saves his life and a connection is formed
between the two that in the course of the story becomes an extraordinarily strong relationship between the
modern, cosmopolitan, and educated Eliška and the barbaric, salt of the earth man with the soul of a child, Joza.
The resistance group that the doctors are involved in is discovered and hunted by the Gestapo and suddenly their lives are threatened. While Eliška’s lover, Richard, flees the country overnight, the group quickly has to find
a different safe haven for her. They ask Joza, the patient whose life she saved with her blood, to hide her in his
remote mountain cabin. Eliška is forced to leave her urban life and all at once become a new woman: Hana, the wife of a mountain man. Her new home is the wild mountain village where time stopped one hundred and fifty years ago called Zelary.

Zelary tells the story of a clash between two different worlds and two different people. It is the story of an
extraordinary relationship, of fear, misgivings, suspicion and especially of the love that forms out of antagonism
between Eliška/Hana and Joza; a love born of the common will to survive.
Zelary is also the story of a beautiful corner of the Earth where everything lives in accordance with nature and her
often cruel and timeless laws that humans must adapt to and honor. Eliška, in spite of setbacks, but with great
fervor, tries to learn this.

Last but not least, Zelary is also a dramatic story filled with unexpected twists of fate that takes place in
a God-forsaken part of Europe surrounded by the storm of war.