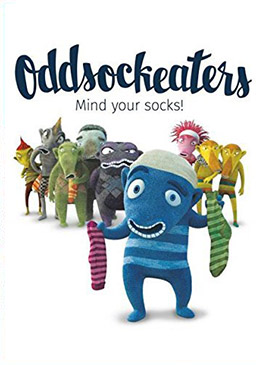 Animated (C.G.I.) family adventure film about the life of Oddsockeaters - sock-like creatures, who are responsible for odd-socks (socks that are missing the other socks) and their coexistence with humans. Inspired by the best-selling books by poet/author Pavel Šrut and artist and film director Galina Miklínová.

The Oddsockeaters are small creatures, who live alongside us humans and are responsible for socks that go missing when we only have one left from a pair - the odd sock. They eat socks, but only one from each pair.

Against the backdrop of a gangster story involving two feuding gangs of oddsockeaters, representing a clash between two generations and two sets of values, we are introduced to the world of the Oddsockeaters. Pavel Šrut, joint screenplay writer and author of the original book, points us towards the similarities between their world and the human world, with the humour for which he is well known and without the connections ever seeming forced.

The fates of the main protagonists  – the Oddsockeaters and their biggest enemy, a lonely eccentric professor, are drawn together by the story of Hugo, a small Oddsockeater and the main character. At an early stage in the film Hugo finds himself in the position of an orphan and outsider. He draws strength from the strong bond he had with his noble-minded Oddsockeater grandfather and refuses to abandon his ideals and principles in the new, harsher environment of the “den of thieves” presided over by his Mafioso uncle, Big Boss. He sticks to his principles even when he often gets into tight scrapes by doing so. If he knowingly goes against his principles, he does so with a heavy heart and only because he knows that he has exhausted all other options to attain the goal he so yearns for – a family.


Although it may be painting the message in slightly too black-and-white terms, the film's moral is this: There is nothing more important than family! Hold on tight to your family, love your family and do everything in your power to keep your family strong, because you only get one family in this world, regardless of whether you are a human or an Oddsockeater.