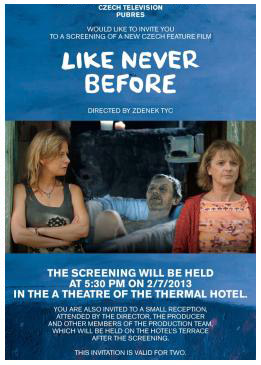 The end of summer in 'LIKE NEVER BEFORE' also means the end of a life. Vladimír Holas, a painter, sculptor and teacher in a small town, is dying. He's made many beautiful paintings – but not as great as he'd wished them to be. He didn't join the Communist party or the Fine Artists Union, he didn't sell out to the Communist regime. His country home in the middle of a beautiful landscape is his last resort, the death is unavoidable and he doesn't want to die in a hospital. He wants to fall standing, just like he lived.

The film has three key characters, the main hero and two women: Karla, around thirty five, is somewhat similar to her partner in life: a painter, bohemian, doesn't flinch at using bad language. Jaruna, on the other hand, is very different from the other two, a married nurse of approximately fifty five and the maestro's former lover. The three of them lead useless battles against death, against themselves and among themselves – which brings a form of relief to each of them.

At the beginning of the film, we see Holas still trying to paint and create art, and get mad at his lack of strength. He doesn't yet know his energy will disappear like water in hot sand, that everything will go so fast. The circumstances force him into bed - his death bed. All he can do is have it dragged out of the house a few times to watch stars or lie by the open fire…

The two women eventually grow closer to each other. They are different, but that doesn't stop them from concentrating on what's really important.

Markéta Bidlasová, the author of the screenplay, presents this cruel world without artificial sweetener, through powerful situations and three-dimensional supporting characters who do not understand Karla and Jaruna's truculent care of Vladimír, or their 'coexistence' and revolt against it. Tomáš, the main hero's son, also makes appearance and finds it hard to come to grips with realising that he is so similar to his father in many ways, that he cares about him despite years of denial. In the film, dying is no easy matter, caring for a dying person is an ordeal. Just like in life.

You can find out who you are when you are close to death. Then again you may not. Each of us can become a primitive, running after the illusion of a win, or a person happy with their life. Ordinary? Boring? Banal life? Possibly, but only until we find out it's about to end and there's no way to get it back.